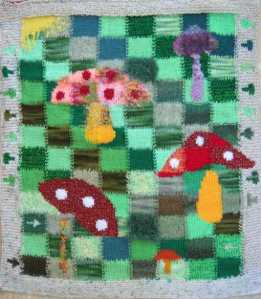 This is the first version of ‘Elfy Game’, to go with the story ‘The mushroom under the Elf’.

To play: go down on a mushroom leg, up on a head and up on a sun ray, + some rules to be added by the kid for extra fun (like fuzzy squares and white dots). 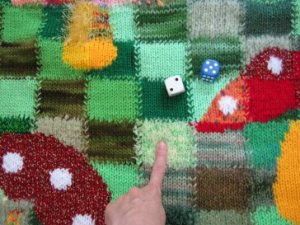 Apart for plating it with Hubby (every night before bed as the game was progressing) I played it with 2 nine years old – first on a table, then they drugged me for another game on the floor + wanted another one! One of them read the story aloud before we played – still needs work + a lot of photos before it’s done… crawling my way on it, wish it went faster (as in waiving my magic wand and Ta Da – it’s done! 🙂

The second version of the knit game is done already, and hope to post it soon.